Irish Music from the Hudson Valley

by Dylan Foley and Dan Gurney 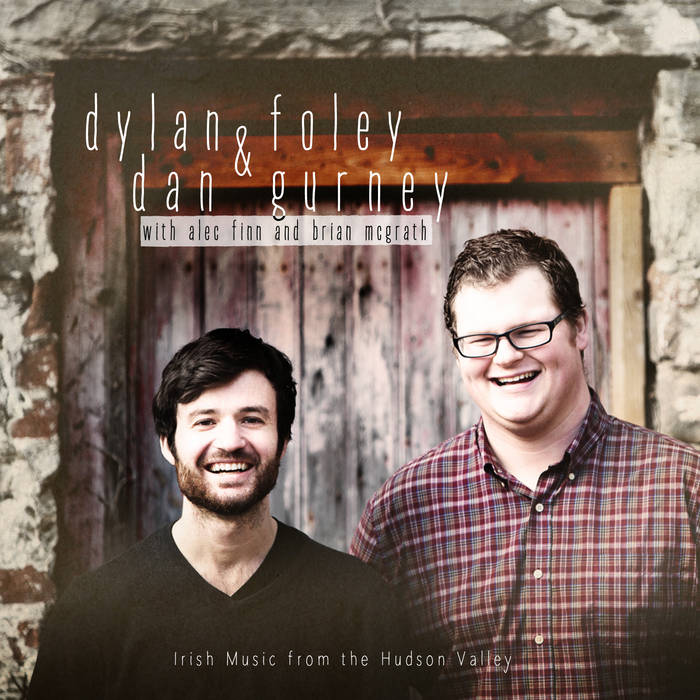 We would like to dedicate this recording to Fr. Charlie Coen and Mike McHale.

Dylan Foley and Dan Gurney are two of the finest young Irish American musicians around. They both come from the Southern Catskill Mountains not too far from the Hudson River. Born just five years apart (Dan was born on April 24, 1987 and Dylan on February 8, 1992) they got good at playing Irish music at a very young age even though they grew up far from the thriving traditional music scenes of New York and Boston.

Dylan was introduced to the contra dance scene by his parents when he was about four and has pleasant memories of enjoying the music and falling asleep beside the band as the dances wore into the night. He took Suzuki lessons on the violin when he was about eight and after his teacher moved away his mother drove him every other week to the Pearl River area where he took lessons from Rose Flanagan, a gifted fiddler and teacher. He was only ever interested in playing Irish music.

Dan grew up loving his father’s LP’s of American folk music. He was drawn particularly to instrumental music and at the age of eight took up the accordion and became really interested in Irish music. In those early years he took occasional lessons from some of the accordion players he most admired; musicians such as John Whelan and Billy McComiskey. At Billy’s urging he switched from the D/G to the B/C accordion which is the version of the instrument most common in Irish music today. He credits the influence of the all-accordion album The Big Squeeze, issued on the Green Linnet label in 1988, with introducing him to a variety of playing styles.

As they grew older Dylan and Dan began to attend regularly the Catskills Irish Week in East Durham where they were exposed to a wide array of players from both the Irish and American music scenes.

But the primary influences on the two young musicians were flute and whistle player Mike McHale from County Roscommon and Father Charlie Coen from County Galway, both long time residents of the Catskills area. Mike emigrated to the US in 1959, one year after he won the All Ireland Title on tin whistle. He has a vast repertoire of beautiful old tunes, some of which were fairly new to the scene when he emigrated, but are now played widely. Charlie Coen emigrated to the United States from the village of Woodford in East Galway in 1955. After years working at various jobs in the Catskills area he was drawn to the priesthood and ordained in 1968. After being stationed in a parish in Staten Island he moved to Red Hook in the Catskills in the early 1980’s and has been there ever since. He is a fine concertina and flute player, steeped in the music of East Galway.

The only regular Irish music event held in the Southern Catskills was the Sunday afternoon concert series in the Rhinecliff Hotel two miles from the picturesque town of Rhinebeck. Once a rather grand building (now once more restored to its former magnificence) the small hotel at the time was no more than a charming, dilapidated semi-ruin situated right beside the Amtrak railway station. But on the first and second Sunday afternoons of every month the scruffy ground floor came alive when Father Charlie brought his friends and fellow musicians from Boston and New York and sometimes further afield to play a little acoustic concert for a small but very attentive gathering of enthusiasts. An informal session would always follow where local musicians would join in. Mike McHale was there most of the time and he and Charlie would lead the way. Mike also formed the Catskills Ceili Band to play for dancing and Dan and Dylan were active members. According to Dylan they did “a lot of listening and observing” in those days. They also ended up playing together regularly which in time was to lead to the recording of this album.

Father Charlie and Mike like their music steady, tastefully ornamented and generally understated with subtle rhythmic shifts. They feel that the notes breathe better that way and that the beauty of the tunes comes out more clearly. An increasing number of younger players with enormous technical ability are now drawn to this way of playing the music. Dylan and Dan are two such musicians. They both possess an abundance of brilliant technical ability and can certainly play as fast as they choose if they want. They know it’s great fun to do that and it is another dimension to a musical tradition that offers many performance possibilities. But they feel that the rich but understated music of Mike and Charlie represents a kind of comfortable home base for both of them.

For most Irish American musicians, contact with the home country of their people and its music is very important. To be accepted by peers in the homeland represents an important affirmation for expatriate artists in just about any global setting. This happened for Dan when he moved to Galway for a year after graduating from Harvard University and the word quickly went out about this brilliant young American accordion player. Dylan too is well known in Ireland among his counterparts for his virtuosity and also his most genial personality but when he won the All Ireland Senior Fiddle competition in 2014 that represented of course an official endorsement of his skill at the highest level.

So when Dan and Dylan decided to make this CD as a kind of formal ‘thank you’ to Father Charlie and Mike for their influence and guidance, they decided to record it in Ireland rather than the US. They freely acknowledge that American-born Irish musicians almost invariably feel they have to prove themselves back in Ireland which is why they very deliberately made this decision.

They wanted accompaniment for the music and the decision as to who would provide it fell neatly into place. Dylan had played for Alec Finn’s bouzouki classes at the Catskills Irish Arts Week and there they developed a mutual admiration society for each other’s work. Alec has been a most prominent figure in Irish music since his early years with the brilliant, mercurial group De Danann. Outstanding tenor banjo player and pianist Brian McGrath, who had cut his musical teeth with the colorful and flamboyant group Four Men and a Dog, had met and worked with Dan during the year he spent in Galway. He liked Dan and he liked his music so they worked out the details and in March 2015 came together in a small studio in County Longford.

They elected to record in a very simple fashion. Rather than isolate themselves in booths they decided to sit in a semi-circle and let the music happen live more or less in the same way it would happen in an informal session. Brian told me that they hardly ever did a second take of the tunes and did very few edits. The merit of this approach really shows on the recording. There is a very natural feel to the music. Brian and Alec are of course among the most gifted accompanists in Irish music and their backup blended perfectly with each selection of tunes.

For this album Dan and Dylan did not give a great deal of thought to the repertoire selection beyond the feeling that they should select tunes they felt that Mike and Father Charlie might either play or like. Some of the tunes were actually learned from Mike and Charlie including the marches and The Dawn and Moving Cloud reel selection. They play them all with a kind of breezy, almost jaunty, informality underscored with impeccable technique.

Dan and Dylan’s CD’s with guitar and bouzouki player Sean Earnest and uilleann piper and flute player Isaac Alderson in a group named appropriately The Yanks were well received in the thriving Irish music scene both in the US and Ireland where just about everyone was impressed by their musicianship. This new recording is sure to add depth and a new level of maturity to the most impressive resume of this dynamic and engaging Irish American musical duo.

1. Reels: The Dawn / The Moving Cloud
We got these two reels from Monsignor Charlie Coen, who ran the Rhinecliff Hotel concerts and sessions we attended while growing up in the Hudson Valley. The Moving Cloud was composed by Neilidh Boyle.

6. Hornpipes: The Echo / The Ballyoran
The Ballyoran is a composition of Sean Ryan. Father Charlie plays these two hornpipes together.

7. Reels: Rolling in the Barrel / Paddy Kelly’s / Rolling on the Ryegrass
The first tune was made famous by Paddy Canny and P.J. Hayes. According to Jack Coen, the second reel was composed by Paddy Kelly. Rolling in the Ryegrass was renamed The Shannon Breeze by Francis O’Neill because he thought the original title too suggestive.

8. Reels: The Flags of Dublin / The Four Courts
Dylan learned The Four Courts from Rose Flanagan, his first fiddle teacher who lives and teaches in Pearl River, NY.

9. The Flowers of Spring / The Cuckoo
These hornpipes come from James Morrison and Joe Burke respectively.

10. Marches: The Slieve Aughty / The Centenary
We got these marches from Roscommon flute player Mike McHale, who now lives in Catskill, NY with his wife Kathleen and was instrumental in starting the Catskills Irish Arts Week.

11: Jigs: The Keys to the Convent / The Mooncoin
Brian Conway, another of Dylan’s fiddle teachers, supplied the title of this first jig, and we learned the second from Brian’s sister Rose.

18: Jigs: The New House / Dinny O’Brien’s
Paddy O’Brien of Tipperary wrote both of these jigs.

Bandcamp Daily  your guide to the world of Bandcamp